All parrots have the habit of preening themselves or their congeners to keep the feathers clean but also to express a social message. On the other hand, plucking feathers is rather a condition in which the parrot pulls to tear the feathers with his beak, preventing their normal development. In some more advanced cases, only the feathers on the head remain because the bird can not reach them while the whole body is found bared without any feathers. In more severe cases, the parrot also inflicts himselves skin lesions, even damaging the follicles of the feathers and jeopardizing any possibility of growth. This condition is closely related to the living conditions in captivity. Given the importance of feathers for birds (thermoregulation, flight, skin protection), a parrot who self-injures, have very little chance of surviving in the wild. This simple observation is sufficient enough to recognize that the psychological state of the parrot plays a significant role in this syndrome.

Some species of Psittacidae are more disposed than others to pecking. Considering that many parrots who pluck themselves are suffering from itching because we see them scratching or preening in a restricted area generally. Skin irritation that causes itching can have several origins:

• Malnutrition: Vitamin A deficiency, excess fat or low levels of calcium in the diet can cause dry skin, which may lead to feathers plucking. Hypovitaminosis A promotes Furthermore, bacterial or fungal dermatitis and other infections.
• Internal Diseases: Many sick birds tend to pluck their feathers, this type of behavior was observed during bacterial infections, worms, haemoparasitic, ingestion of toxic substances.
• External parasites: mites (especially in Budgies) cause skin itching often leading to picking feathers.
• giardiasis: this parasitic infection (especially in Cockatiels) is related to plucking feathers due to an immune reaction of the body.
• Skin infections: cases of pulling feathers have been reported due to viral infections of the skin (pox, herpes).
• Other changes on the skin: skin cysts, broken or blood feathers, sheath persistent tumors, small cuts or lacerations, contusions can lead to picking feathers also.
• Hormone alterations : a lack of thyroid hormones, adrenal and sex is sometimes associated with plucking feathers.
• Sexual behavior: it is not unusual to see Psittacidae plucking belly feathers to prepare the incubation. We see this behavior in particular with Cockatoos and Macaws. Sexual frustration of a parrot that can't mate can also cause this syndrome.
• Environmental factors: some environmental factors can irritate the skin, among them, cigarette smoke, cooking smoke and low humidity in the room can lead to plucking feathers.
• Psychological factors: Parrots are very intelligent animals who need to be stimulated mentally. In nature, the Psittacidae are constantly in motion, mostly in search of food. They are restricted to a cage without any stimulus is like locking a human in a cell and can manifest itself in a situation of neurotic behaviors such as obsessively tearing feathers. This condition often appears in African grey, macaws and cockatoos (topics syndrome of psychological origin) and the Amazons and Cockatiels (topics syndrome of organic origin). It can also occur when an important event occurs in the household (birth of a child, the arrival of another pet, etc..), Which makes the owner's attention turns away from the parrot, triggering in him jealousy manifested through this mutilation. The loss or disappearance of the owner can also cause this kind of reaction. In some cases, the parrot understands that the act of pulling feathers gets the owner's attention, who comes to him every time he does, which only reinforces the behavior.

Some traditional remedies are prescribed to treat the syndrome of plucking feathers (wearing a collar, spray a product unpleasant in the feathers, tranquilizers administration ), even if it works in some cases, they should not be considered as an alternative, only an investigation into the ill-being of the animal, being physical or mental (or both), will determine the most appropriate treatment. If the disease is physical, only thorough clinical testing will determine the cause. Plucking syndrome is more complex to deal with when the origine is physical, diagnosis being sometimes based on a simple intuition or impose itself by elimination, in the absence of other obvious causes. You will find below a list of tips and tricks to counter boredom and discomfort of the parrot plucking feathers:

• Spend more time with your parrot playing with him, giving him food or talking to him;
• Leave the TV or radio on when the parrot is alone;
• Give the parrot toys that are safe and fun for him.
• Hide food to keep him busy during your absence.
• Place the cage in a place frequented used by all and which have strong domestic activity.
• Spray the animal with warm water so he spends more time preening instead of plucking.
• If you choose the collar, be sure to remove it from time to time to carry out his grooming and observe the behavior of the animal and his response to treatment.

Sometimes unsuitable treatments will deteriorate the condition of the animal, such as:

• Presenting a parrot companion to distract the plucking parrot, this method is successful only in cases where the syndrome is caused by sexual frustration, in most other cases, the newcomer will become a victim of aggression or he will be taught to pluck his own feathers also.
• Applying repellent plumage substance is ineffective and contributes to add additional stress to the bird and helps maintain their plumage in bad condition.
• Scolding a parrot who plucks feathers tears will make the problem worst, what the bird will understand is that he gets the owner's attention by plucking himself. If you want to punish a parrot for bad behavior, ignore it and walk away a few minutes.

Here are some pictures of parrots with plucking problems. These images are courtesy of the shelter: Sur les ailes de nos perroquets, and we want to thank them. 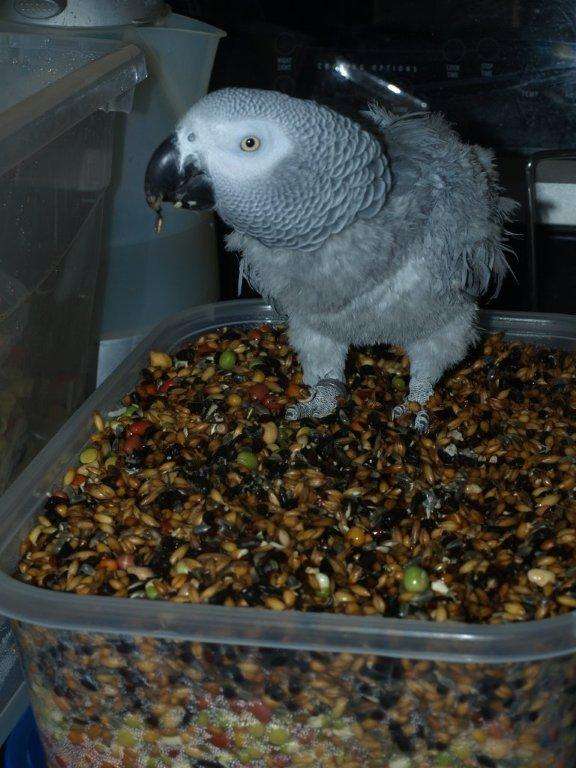 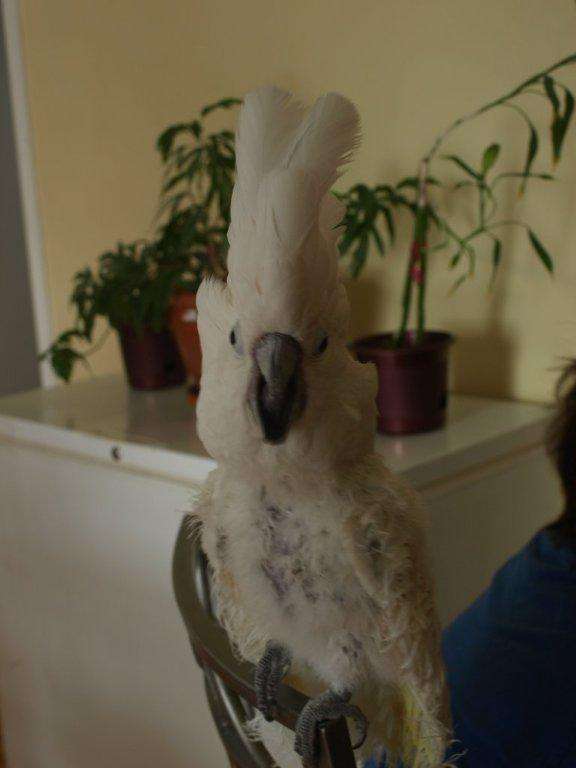 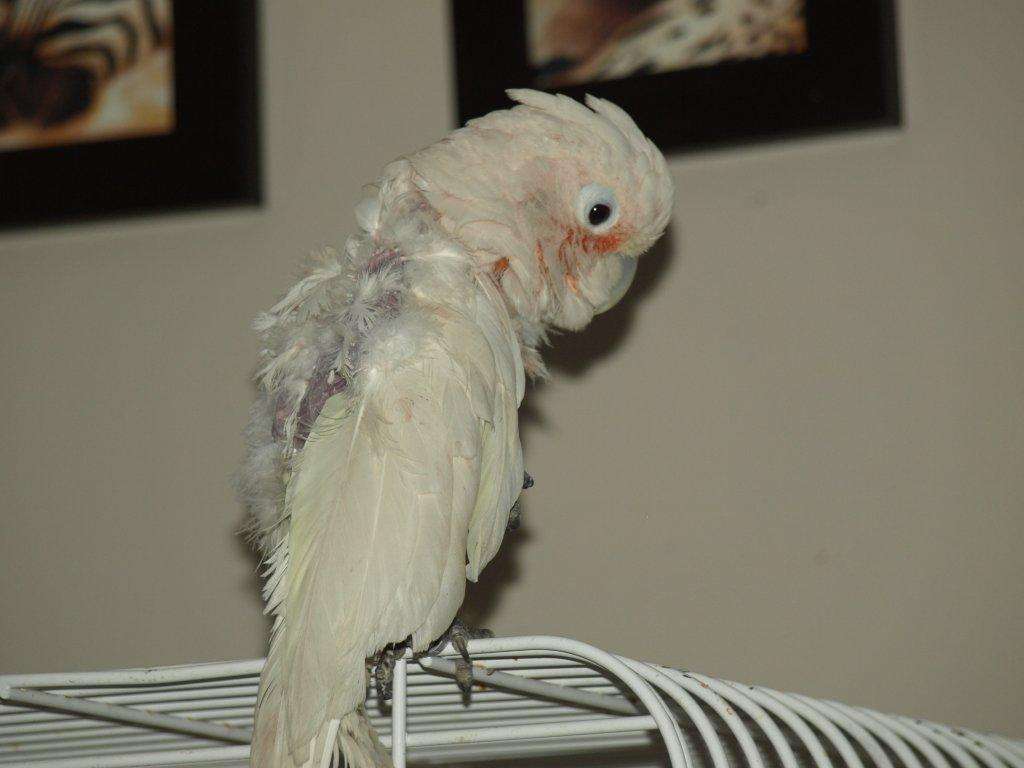 By paco64 at 2011-02-08
Patof a small little goffin with a collar to prevent self-harm. When the collar is taken of, he starts plucking some more. 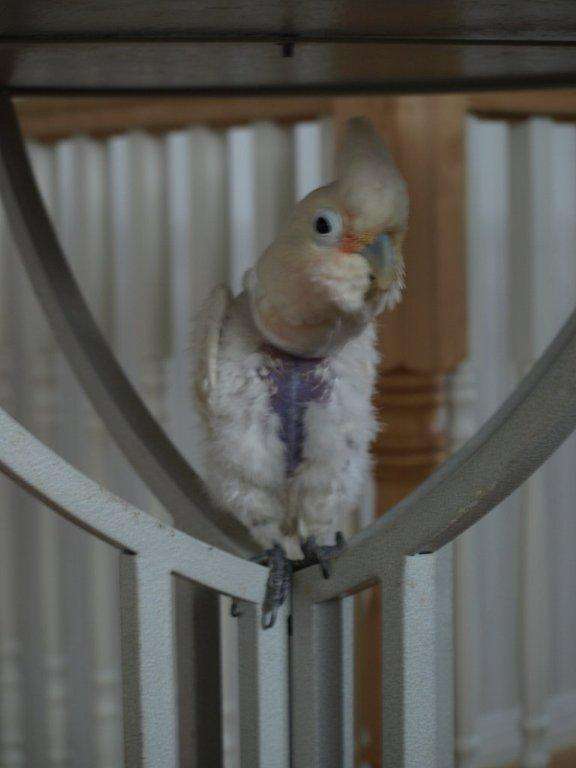